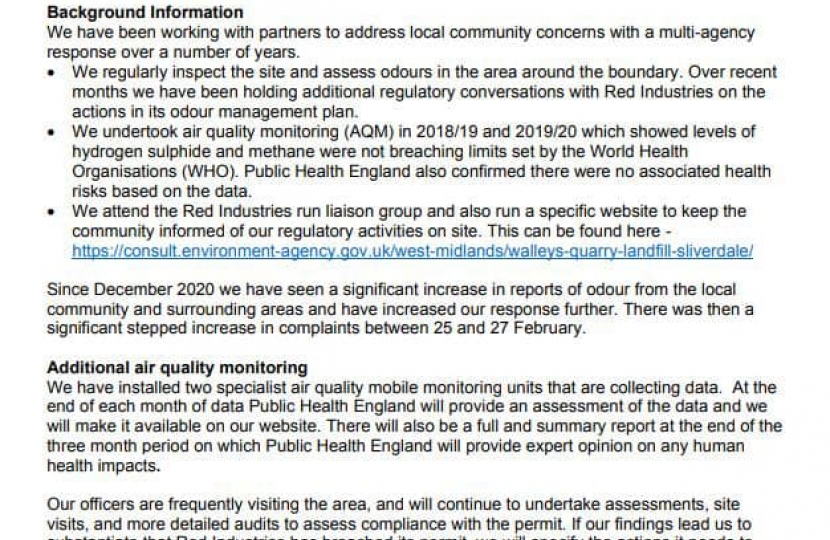 The Environment Agency issued the attached briefing earlier today. I believe they will be issuing a further response to Red’s decision to “curtail” operations in due course.

I have repeatedly held the EA to account throughout my time as an MP, and, as you have all seen, I have not been shy of criticising them when I feel it has been deserved.

However I have reason to believe that today’s developments may well be as a result of their enforcement and audit action, so I would like to thank them for helping to progress the issue. I await their findings with exceptional interest.

Regional Area Director Clare Dinnis has made herself available to me for multiple calls and briefings in the last fortnight, and I thank her for that. I know the EA have also been working with other local stakeholders on this issue, particularly in response to the increased odour issues since the 25th February.

At the end of their briefing, the EA have asked that people now report odour via ics@environment-agency.gov.uk wherever possible rather than via the phone line, because they fear Newcastle residents’ justified complaints may stop other reports of new environmental incidents elsewhere in the country from getting through.

Even with the suspension of operations, I would encourage residents to keep reporting odour, but I am prepared to accept the case the EA have made and I would ask people to use email wherever possible. I have asked for, and received, assurances from the EA that all reports via email will continue to receive reference numbers. These may not be instant, but they will come. I believe the EA are also developing a dedicated webpage to make reporting easier.

Clearly Red’s suspension of operations may affect the data from the monitoring stations - I have seen people asking that in the comments on the last thread. I will be pressing for EA monitoring stations to remain in place both throughout the current period and then stay there if and when Red resume taking waste.

Finally, I would again ask people not to hassle any EA or council operatives who are out on odour tours. They are simply doing their job and should be able to do so without fear or intimidation.

I should be on BBC Radio Stoke tomorrow shortly after 7.10am to talk further about this. We have had some welcome progress today, but there is a lot still to be explained.

In light of constituency correspondence, I have today written to the Chair of the Thistleberry Residents' Association.