WALLEY'S QUARRY - RESPONSE FROM THE EA 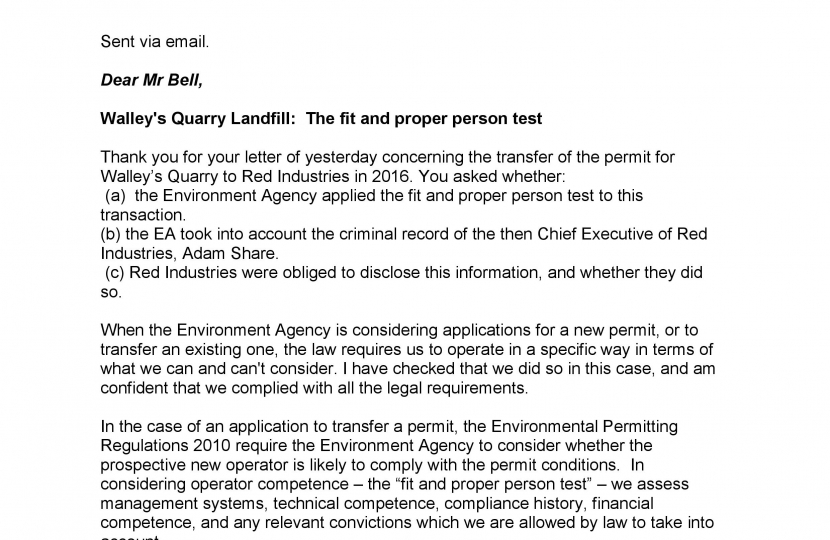 I am very thankful to Sir James Bevan for his quick reply to my letter regarding the "fit and proper person" test. (https://www.facebook.com/AaronBell4NUL/posts/584283809640813?)

I spoke with the Environment Agency after they sent me the response and my understanding is that they are bound by law in this matter, and they are confident that all legal requirements were complied with in their assessments.

However, as I have said before, I have no confidence in Red Industries - or whatever they are calling themselves these days - continuing to operate the site, and I will continue to make that clear.

On a similar note, I spoke with Jonathan Gullis MP last night about the application that Red have made to treat and dispose of aerosols at their Sneyd Hill site (see https://www.facebook.com/jonathangullis/posts/1333914660335824). I know Jonathan will be standing up for his constituents over this, and I intend to make my own submission to the consultation too.

I also asked the EA about a couple of matters that have been highlighted on social media, namely continued tipping and the presence of tyres on site. They gave me their understanding of the situation, but it should be for Red to explain themselves.

On the tipping, this is apparently as part of further capping work at the join between cells 1 & 4, to increase the stability of the land mass there. And the tyres are claimed to be being used as markers to direct traffic on the landfill, which is seemingly relatively standard practice on landfills.

As I say, it should be Red explaining these sorts of things to the community, rather than expecting me, the EA, or the Liaison Committee to do it.

After the Prime Minister's Press Conference about delaying Covid-19 restrictions the Health Secretary made a statement in the House of Commons.