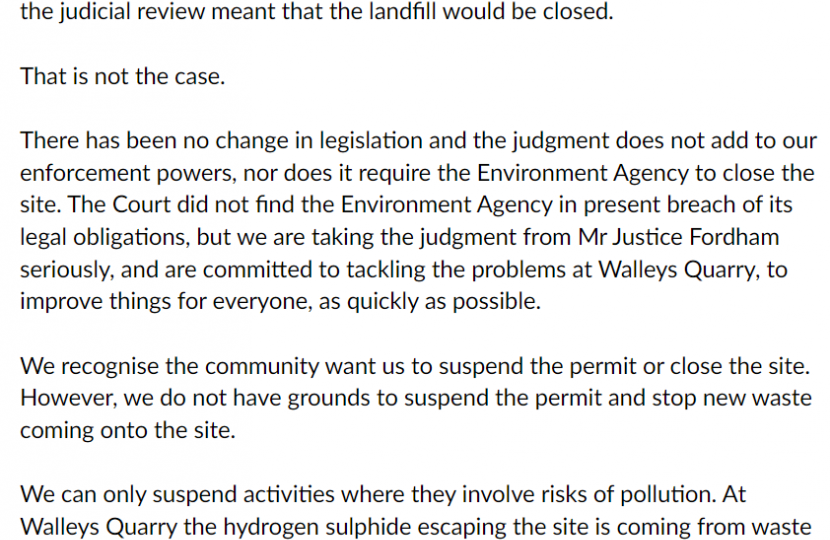 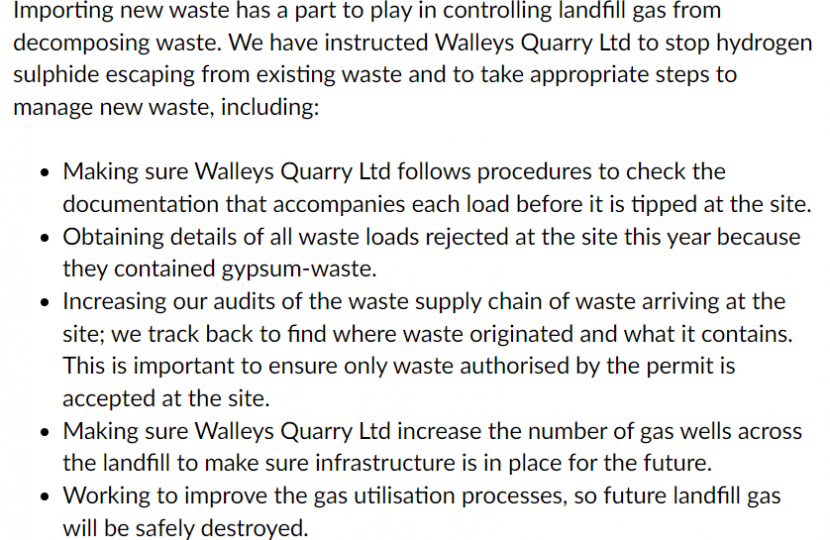 The weekly Environment Agency update is now out and can be read in full here: https://consult.environment-agency.gov.uk/…/walleys-quarry…/

I met with the EA on Monday to ask what further measures they will be taking to address the recent High Court judgement. I put it to the EA that, as the ruling said they should do “much, much more” than is currently being done, suspending the permit and stopping new waste coming onto the site would be within the scope of the judgement, particularly in light of the comments the judge made around waste acceptance.

In my view, although I am not a lawyer, the judgement greatly strengthens the EA's hand in dealing with the operator, as the judge has found that the EA has responsibilities under Article 2 and Article 8 to protect the rights of Mathew (and indeed the whole community).

As I heard from the EA, and as can be seen from the attached screenshots, that is not the EA's current interpretation of the law. This may yet be tested further in court.

There will be no fixed presentation or speeches, and people can ‘drop-in’ at any time during the event and talk directly to representatives of the councils and agencies at different tables.

I will of course re-publicise this next week, and there will be a further event on the subsequent Tuesday.

The best news is that the engineering work is proceeding as expected and should greatly increase the amount of gas captured.

The Posi-Shell material is covering the flanks as expected - this is being applied by independent certified experts. Early indications from surface emissions surveys suggest it is having a positive effect; however the data still needs to be analysed, assessed and validated.

Walleys Quarry Ltd have said work on drilling the gas wells is progressing as planned, and will see 28 new gas wells completed and operational by the end of October. Again, this will increase the amount of gas captured and destroyed.

I know people are concerned about winter, as in previous years hydrogen sulphide has proved more persistent due to the cooler temperatures and lack of sunlight. I very much hope that this engineering work will prove sufficient to capture almost all the gas, and get us down to the very low background levels of landfill gas that Mr Justice Fordham demanded in his judgement.