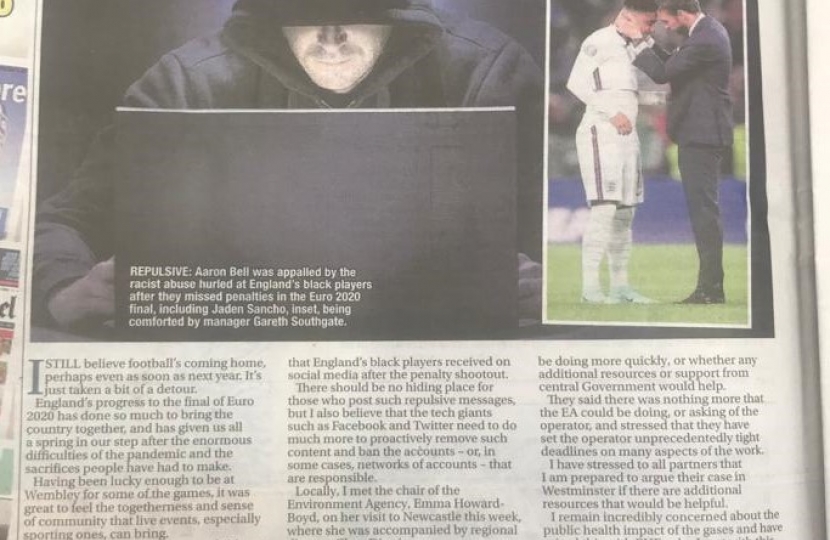 My monthly Sentinel / Stoke-on-Trent Live column is out today - I have reproduced the text below.

I still believe football’s coming home, perhaps even as soon as next year. It's just taken a bit of a detour. England’s progress to the final of Euro 2020 has done so much to bring the country together and has given us all a spring in our step after the enormous difficulties of the pandemic and the sacrifices people have had to make. Having been lucky enough to be at Wembley for some of the games, it was great to feel the togetherness and sense of community that live events, especially sporting ones, can bring.

I also enjoyed introducing my children to the highs and lows of supporting England. My first clear memories of an international tournament are those of Italia ‘90, when I was the same age my son is now. I can still recall Gazza’s tears, and the misses from Stuart Pearce and Chris Waddle that represent the origins of our penalty curse. I hope my children won’t have to wait as long as I have done for another final!

In the words of Her Majesty the Queen, I believe history will record not only the England team’s success, led by Gareth Southgate, but also the spirit, commitment and pride with which they have conducted themselves. The squad have clearly been very tight-knit, which hasn’t always been the case with England teams. These young men have obviously been playing for each other as well as for the country.

Sadly, however, the ugly spectres of hooliganism and racism detracted from the final – in particular the racist abuse that England’s black players received on social media after the penalty shootout. There should be no hiding place for those who post such repulsive messages, but I also believe that the tech giants such as Facebook and Twitter need to do much more to proactively remove such content and ban the accounts – or, in some cases, networks of accounts – that are responsible.

Locally, I met the Chair of the Environment Agency, Emma Howard-Boyd, on her visit to Newcastle this week, where she was accompanied by Regional Director Clare Dinnis. I am pleased to see that the EA continue to engage on this issue at the highest levels.

Recorded levels of hydrogen sulphide have been falling at the monitoring stations, though it is too early to say whether this trend will continue, as in previous years the issue often subsides during the summer months. However many residents are still reporting very bad odour incidents, particularly at night.

The EA reported that the novel Posi-Shell capping should be on site shortly. This capping, which is being used for the first time on a UK landfill, will cover the steep flanks of the site, and increase the area capped from approximately 50% of the site to around 70%, which should further reduce the amount of gas able to emanate from the site.

I repeatedly pressed Emma & Clare as to whether there is anything they could be doing more quickly or whether any additional resources or support from central Government would help. They said there was nothing more that the EA could be doing, or asking of the operator, and stressed that they have set the operator unprecedentedly tight deadlines on many aspects of the work. I have stressed to all partners that I am prepared to argue their case in Westminster if there are additional resources that would be helpful.

I remain incredibly concerned about the public health impact of the gases and have raised this with PHE, who I met with this month, and others. I will also continue to stress to all agencies and bodies involved in responding to this crisis the importance of public engagement on these issues.

I was also grateful to have the opportunity to highlight Walley’s Quarry at Prime Minister’s Question Time this week. I will keep raising this issue with everyone who can make a difference until it is resolved. I will not rest until the stink is stopped, and those responsible for the odour have been held properly and fully to account.