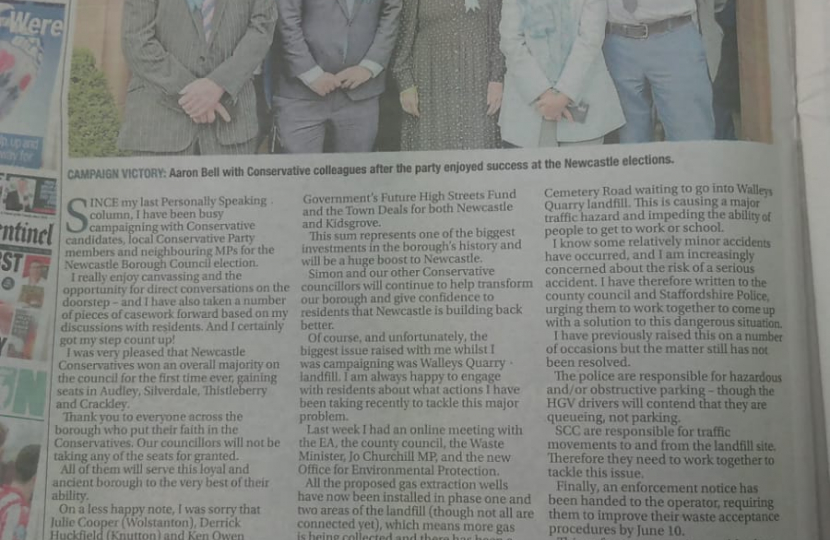 My monthly column was published in today's Sentinel - the text is below.

Since my last Personally Speaking column, I have been busy campaigning with Conservative candidates, local Conservative Party members and neighbouring MPs for the Newcastle-under-Lyme Borough Council election.

I really enjoy canvassing and the opportunity for direct conversations on the doorstep - and I have also taken a number of pieces of casework forward based on my discussions with residents. And I certainly got my step count up!

I was very pleased that Newcastle Conservatives won an overall majority on the Council for the first time ever, gaining seats in Audley, Silverdale, Thistleberry and Crackley.

Thank you to everyone across the Borough who put their faith in the Conservatives. Our councillors will not be taking any of the seats for granted. All of them will serve this loyal and ancient Borough to the very best of their ability.

On a less happy note, I was sorry that Julie Cooper (Wolstanton), Derrick Huckfield (Knutton) and Ken Owen (Holditch & Chesterton) lost their bids for re-election, and would like to thank them for their service on the council.

I would also like to thank everyone who put themselves forward for election, from all parties and those who stood as independents: it’s a big task to undertake and of course there’s often disappointment at the end of it. Anyone who puts themselves forward, to serve at any level, contributes to the vibrancy of our democracy.

Newcastle-under-Lyme Borough Council, under the excellent leadership of Cllr Simon Tagg, is seeing a huge amount of investment to Newcastle to make our town an even better place to live. The money includes over £50 million from the Government’s Future High Streets Fund and the Town Deals for both Newcastle and Kidsgrove. This sum represents one of the biggest investments in the Borough’s history and will be a huge boost to Newcastle-under-Lyme.

Simon and our other Conservative councillors will continue to help transform our Borough and give confidence to residents that Newcastle-under-Lyme is building back better.

Of course, and unfortunately, the biggest issue raised with me whilst I was campaigning was Walley’s Quarry landfill. I am always happy to engage with residents about what actions I have been taking recently to tackle this major problem.

Last week I had an online meetings with the EA, the County Council, the Waste Minister, Jo Churchill MP, and the new Office for Environmental Protection.

All the proposed gas extraction wells have now been installed in phase one and two areas of the landfill (though not all are connected yet), which means more gas is being collected and there has been a significant reduction in the escape of gas. This has led to a recent fall in recorded odour and complaint numbers, though these are still significant so more needs to be done.

The completion of cell 1 is on track to be completed by the end of the month, and this will be followed by permanent capping which should lead to a further reduction in odour.

A number of constituents have also written to me regarding the HGVs on Cemetery Road waiting to go into Walley’s Quarry landfill. This is causing a major traffic hazard and impeding the ability of people to get to work or school.

I know that some relatively minor accidents have already occurred, and I am increasingly concerned about the risk of a serious accident.

I have therefore written to the County Council and Staffordshire Police again, urging them to work together to come up with a solution to this dangerous situation.

I have previously raised this on a number of occasions but the matter still has not been resolved. The Police are responsible for hazardous and/or obstructive parking – though the HGV drivers will contend that they are queueing, not parking. SCC are responsible for traffic movements to and from the landfill site. Therefore they need to work together to tackle this issue.

Finally, an enforcement notice has been handed to the operator, requiring them to improve their waste acceptance procedures by 10 June 2022. This enforcement notice, and further breaches reported recently, only add to the long list of evidence showing that Walley's Quarry landfill is very far from a compliant site.

I will continue to push this issue through all relevant channels until we can live stink free. Both the councils (Borough & County) and I are still pushing for an early capping-off of the whole site, and for the removal of the permit.