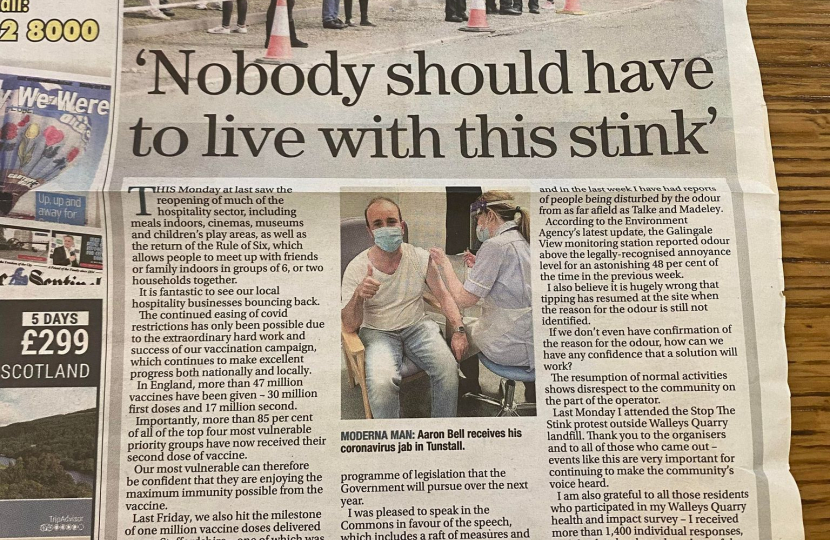 My monthly column was published in today's Sentinel - the text is below.

This Monday at last saw the reopening of much of the hospitality sector, including meals indoors, cinemas, museums and children’s play areas, as well as the return of the Rule of Six, which allows people to meet up with friends or family indoors in groups of 6, or 2 households together. It is fantastic to see our local hospitality businesses bouncing back.

The continued easing of Covid restrictions has only been possible due to the extraordinary hard work and success of our vaccination campaign, which continues to make excellent progress both nationally and locally. In England, over 47 million vaccines have been given - more than 30 million first doses and 17 million second doses.

Importantly, more than 85% of all of the top 4 most vulnerable priority groups have now received their second dose of vaccine. Our most vulnerable can therefore be confident that they are enjoying the maximum immunity possible from the vaccine. Last Friday, we also hit the milestone of one million vaccine doses delivered across Staffordshire - one of which was me!

I was delighted this month to receive my first dose of the vaccine at the Tunstall vaccination centre, which was running a really smooth operation with everybody being very well marshalled. I received the Moderna vaccine, as Tunstall is one of three pilot sites in the West Midlands for this vaccine.  I am enormously grateful to all the scientists, our vaccine taskforce, our NHS staff and the volunteers who have helped make this happen.

In Parliament, this month has seen the State Opening of Parliament, whereby Her Majesty the Queen came to the Houses of Parliament to deliver the Queen's Speech, setting out the programme of legislation that the Government will pursue over the next year. I was pleased to speak in the Commons in favour of the speech, which includes a raft of measures and investments that will benefit Newcastle and the country as a whole.

On the local side of things, I have continued to put my energy towards securing a solution to the issues at Walley’s Quarry. Sadly, we are still not where we should be on this issue.

We were told by the Environment Agency to expect a significant reduction in odour following the capping off of cells 1 and 2, which they required Red Industries to undertake. Unfortunately, however, there has so far been no major improvement in the smell.

Since the 30th April deadline, we have continued to see very significant levels of odour coming from Walley’s Quarry, and in the last week I have had reports of people being disturbed by the odour from as far afield as Talke and Madeley. And according to the Environment Agency’s latest update, the Galingale View monitoring station reported odour above the legally-recognised annoyance level for an astonishing 48% of the time in the previous week.

I also believe it is hugely wrong that tipping has resumed at the site when the reason for the odour is still not identified. If we don’t even have confirmation of the reason for the odour, how can we have any confidence that a solution will work this time? The resumption of normal activities shows disrespect to the community on the part of the operator.

Last Monday I attended the Stop The Stink protest outside Walley's Quarry landfill. Thank you to the organisers and to all of those who came out – events like this are very important for continuing to make the community’s voice heard.

I am also grateful to all those residents who participated in my Walley’s Quarry health and impact survey - I received over 1,400 individual responses, and the data has been hugely useful in putting forward the case for further action in meetings in Parliament, as well as in my Adjournment debate on Wednesday.

I will continue to put pressure on the operator and the regulator until this problem is properly resolved. As I said in the House of Commons yesterday, nobody should have to live like this. Enough is enough.