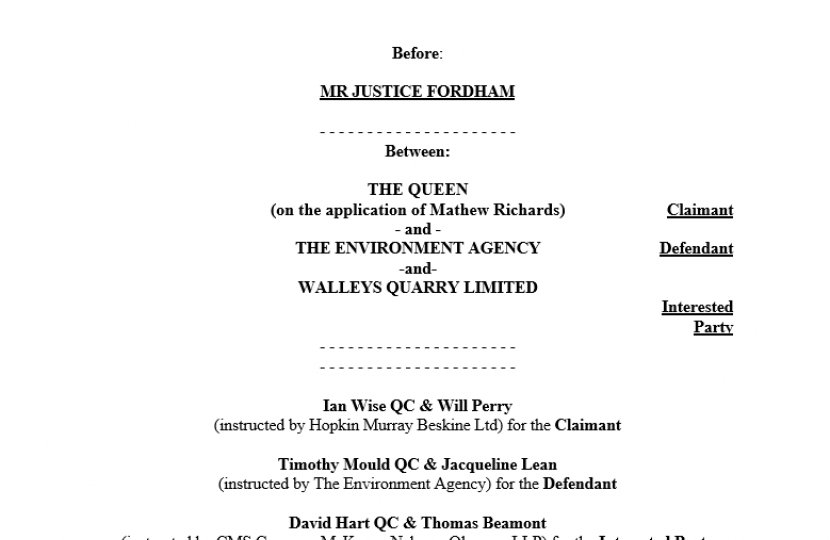 I have just finished reading Mr Justice Fordham's judgement in full, and I will set out some of the relevant sections below. I am delighted that Mathew and his family are happy with the judgement. Later I will provide my thoughts on the findings, what it means going forward for the community as a whole and what I will be doing for you as your local MP.

“In legal terms, the case is about whether the EA is discharging (a) its statutory duty under section 6 of the Human Rights Act 1998 (“the HRA”) to protect Mathew’s Article 2 right to life and his Article 8 right to respect for private and family life and (b) its public law duties at common law to act reasonably and take reasonable steps to acquaint itself with relevant information.

"In the present case, Dr Sinha convincingly assesses Mathew, by reason of the current level of hydrogen sulphide emissions from WQLS (Walley's Quarry Landfill Site), as not recovering on the pathway from the BPD (bronchopulmonary dysplasia) caused by his premature birth to the development of COPD which would mean a substantial and significant reduced life expectancy (earlier death in adulthood).

"(5) The Article 2 positive operational duty is being breached in the present case, for these key reasons: (a) the EA can do “much, much more” than is currently being done, both in relation to waste reception (currently primarily left as a matter of ‘self-regulation’ by WQLS) and in relation to waste which is already on site; (b) the position of children and Mathew in particular has never been addressed by the EA; and (c) the application of the two WHO guideline levels by the EA is inappropriate where the problem is one of chronic exposure and respiratory difficulties, particularly in children and particularly for Mathew. It is inappropriate for the Court to adopt any particular guideline level or value for hydrogen sulphide emissions, no safe level can be supported on behalf of Mathew, in light of Dr Sinha’s evidence. It is inappropriate and unnecessary for the Court to identify any particular step or steps which the EA should be requiring the IP (Walley's Quarry Limited, previously known as Red Industries) to take. What is appropriate, and sufficient, is for the Court to find that the current levels of hydrogen sulphide from WQLS constitute a breach by the EA of its positive operational duty under Article 2.

“(1) There is a positive obligation under Article 8 to take operational steps to protect Mathew’s rights to respect for private and family life, where the triggering condition is met. The triggering condition is severe environmental pollution affecting Mathew’s well-being and adversely affecting private and family life, with a direct effect on Mathew’s home, family life or private life, where the effects of the environmental pollution attain the minimum level, by reference to the circumstances such as intensity, duration, physical and mental effects. (2) That is met by reference to Dr Sinha’s assessment about the significance for Mathew’s health and wellbeing of clean air and the implications of the current levels of hydrogen sulphide emissions. It is met by the evidenced realities – described by Dr Sinha and by Mathew’s mother – as to the health concerns and fears for his health, and the practical effects on Mathew’s well-being, from breathing hydrogen sulphide emissions rather than fresh air. (3) Once triggered, the Article 8 positive obligation on the EA is to take reasonable and appropriate measures to secure rights to private and family life, striking a fair balance between the interests of the individual and of the community as a whole, where the Court has the task of assessing whether state authorities could reasonably be expected to act.

"The Article 8 obligation is being breached, and no fair balance has been struck, essentially for the same reasons as seen in relation to Article 2, but also having regard to the experience of the local community.

“In order for the Environment Agency to comply with its legal obligations, the Agency must implement the advice of Public Health England…and apply such measures as, in the Agency’s regulatory judgment, will and do effectively achieve the following outcomes in relation to emissions of hydrogen sulphide from Walleys Quarry Landfill Site: (1) the reduction of off-site odours so as to meet, as early as possible and thereafter, the World Health Organisation half-hour average (5PPB); and (2) the reduction of daily concentrations in the local area to a level, from January 2022 and thereafter, below the US EPA Reference Value (1PPB)

“I will grant a declaration in these terms…it is critical to make clear that this outcome must be secured. It will secure practical and effective human rights safeguards. It will require pressing and ongoing action which will, in my judgment, make a very real difference so far as the air which Mathew (and his community) breathes is concerned… Having granted that declaratory relief, I accept that it is not necessary – nor is it appropriate – for this Court to say that there is a current breach by the EA of its legal obligations. I have made clear that I am not satisfied, on the evidence, that the EA has yet addressed its legal duties in the way that it must. But there is an obvious and pressing public interest imperative that it must do so, as a matter of urgency.

“Mr Wise QC submits that on a realistic and common sense basis Mathew is the successful party; and that real weight should be given to the overall success, albeit – as is always likely to be the case – the successful party failed on certain issues...