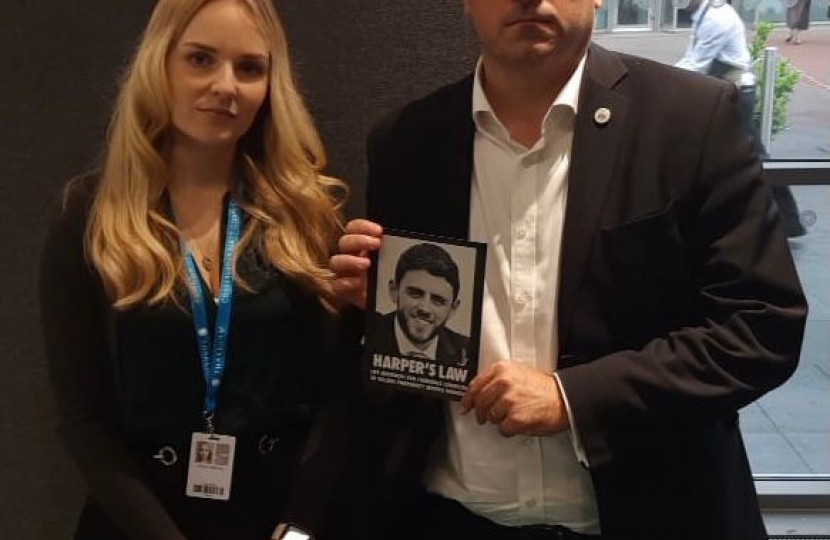 I am very pleased that the Government has announced it will implement Harper's Law. Harper's Law will ensure life means life for those offenders who cause the death of an emergency worker on duty.

Harper’s Law will change the law so that anyone found guilty of killing an emergency worker would be jailed for life. It will apply to any killer of an on-duty police officer, fireman, paramedic or prison officer – and also to a criminal who kills medics providing NHS care.

Harper's law was launched by Lissie Harper, the widow of PC Andrew Harper, whom I met at the Conservative Party Conference. Lissie started her campaign after Andrew was killed in horrific circumstances in August when a car dragged him along country lanes after responding to reports of a stolen quad bike. I pay tribute to her remarkable campaign and I am delighted Harper’s Law has reached this important milestone. I would also like to thank my friend and neighbour, Dr Kieran Mullan MP, for championing Lissie's cause.

Once passed I hope this gives Lissie, as well as other families of emergency service workers piece of mind that the law will protect their loved ones. This government is on the side of victims and their families, and our emergency services should know we will always have their back. The change is expected to become law early next year via an amendment to the Police, Crime, Sentencing and Courts Bill.